Our staff is comprised of dedicated and licensed professionals with the experience to answer all your questions regarding our services. Please feel free to contact any of our staff members at any time.

Born and raised in the South Bend area, Pat believes Michiana is a great place to live and raise a family. Pat has been working in the family funeral business for 45 years. He is a 1972 graduate of John Adams High School and graduated from the Indiana College of Mortuary Science and serves as CEO of McGann Hay. Pat has served on many community boards including the American Heart Association, The Red Cross, YMCA, Camp Eberhart, Camp Fire, Granger Lions Club, Morris Park Country Club, as well as organizing several Adams High School Class reunions. He is also a former President of the Downtown Rotary Club. He is a member of St. Pius X Parish in Granger, and a Fourth Degree member of the Knights of Columbus. He enjoys fishing, golf and, when his children were young, watching and coaching their sports activities. Pat and his wife Tessa live in Granger, where they delight in visits from their four grown children and three grandchildren. Tessa, a native of East Chicago, Indiana, is a graduate of Bishop Noll Institute and Holy Cross School of Nursing. She worked for many years as a nurse at Memorial Hospital, then later at the Notre Dame Infirmary. She later opened a new chapter in her career at Notre Dame's Office of Information Technology, continuing her 25+ year career at Notre Dame.

A South Bend native and proud graduate of the “Pride of the Westside”, Washington High School, with the Class of 2000. Jessica graduated Magna Cum Laude from the Vincennes University Funeral Service Program, and was a member of the Phi Theta Kappa Honor Society. After graduation she served her Internship with the Forest G. Hay Funeral Home where she had worked part time before entering mortuary school.  She became a Licensed Funeral Director and Embalmer in 2005. After the merger of the McGann and Hay families into one funeral operation in 2005, Jessica became a staff funeral director. Today, Jessica is the Operations and Compliance Manager for the McGann Hay firm and is proud of her role in her chosen profession. She values her long time membership in the Ontwa Baptist Church in Edwardsburg, MI and is an active member in the Downtown South Bend Rotary Club, where she served on The Board of Directors. She volunteers time by serving meals at the Center for the Homeless and going on Mission Trips when she has the opportunity. Prior to Mortuary School, she taught Ballroom Dancing at Dan O’Day’s Dance Studio and still loves to dance every chance she gets. Jessica, her husband Jason and their three rescue dogs live on Barron Lake in Niles, MI. 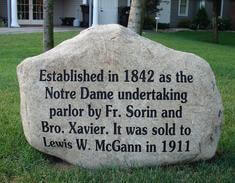